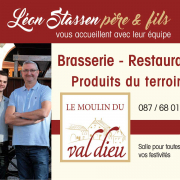 The creation of the restaurant in 1993

The “Moulin du Val-Dieu” restaurant has a major selling point: it is situated in … Val-Dieu.

It definitely did not steal its name! It also owns several buildings surrounding it and quite a lot of land crossed by the river “ Bel” as well as other waterways currently alimenting the turbine of the installations.

When in 1972-1973 the old activities of the mill are ended for more modern facilities, the Mill slowly goes into hibernation  even with a small number of milling activities still continuing until 1986.

Well aware of the historical, economic and touristic value of the whole complex, the owners, Alphonse and Christion Hick and Philippe Van Laethem decide to transform the old Mill and some of the buildings of the old farm in a gastronomic place.

The principal objective is to create a synergy between the mill activity where specialised feed is produced and the newly installed restaurant in the old Mill.  In order to respect this objective, the produce used is mainly sourced from farms using the products of the mill.  Next objective is to present, prepare or, depending on their category, to transform them.

The restaurant is divided in 3 areas:

Part of the ground floor and the belfry have been made into a small museum. Near the millstones one can find all sorts of objects covering a number of centuries as well as some archives.

On June 23rd 1993 the whole establishment was inaugurated as “ Le Restaurant du Moulin du Val-Dieu”; it was managed by the owners Alphonse Hick, Christian Hick and Philippe Van Laethem until end 2006. In order to spend most of their time on the mill and the farms of Moulin du Val-Dieu, they then decide to leave the management to somebody else. Since December 2017, taking over from traiteur “Les Cours”, it is the Léon Stassen sprl that is managing the restaurant.

The mechanism of the old Mill is still running, it is possible to organise guided visits of the mill as well as the nature reserve only by reservation. For more information, please contact our guide, Martine Crahay on 0495/75.76.47.

And why not ask the principal character in this story to give us a last couple of words: … our Old Mill.

“I did everything I could to resist so as to still be present today after 800 years! I helped a number of generations of millers. I helped and encouraged them by running my millstones continuously. In the second half of the 20th century, it was then decided to separate me from my main activity, the milling, by transferring the activity to a new, more modern facility. In a sense I was pensioned of. Today I’m a page in the history books. People come and observe me, sometimes they admire me and they relax whilst tasting some local produce with friends or family. Many people just stop to admire my wheel which turns slowly with the rhythm of the water, an illustration of slow living. Now and then for the benefit of young students or groups of visitors I activate my whole mechanism which they then admire with open mouths. And you too, I’m waiting for you to spend a nice moment together. Come and discover me and if you wish, I’ll tell you some of my many old stories.

Also, my adventures can be found in two books: “ Le Moulin du Val-Dieu, 800 years along the water” and “Saint-Jean-Sart, 8 centuries on the flanks of the Bel” because that little village is also an integral part of my life”.

At the end of the 12th century life is hard for the Cistercian monks of the St Agatha Abbey in Hocht near Maastricht. They decide to purchase land in Warsage where they start a farm. The region is more welcoming and the land promising. The zone is the border between the Duchy of Luxembourg and the County of Dalhem. After having participated in many battles in the region, Henri III, Duke of Limburg, starts worrying about the state of his soul…which is a bit overloaded. His neighbour, The Count of Dalhem has the same concerns. Together they donate some land in the Berwinne Valley to the St Agatha Abbey thus laying the basis for the Val –Dieu Abbey.

Indeed they donate land, but of course not the best land. It’s a fairly hostile bit of land in need of care, but near to the waterways “la Bel” and “la Berwinne”. It was ideal for the Cistercian monks who follow the rules of St Benoit dictating they should live of the land and forbids eating meat. A waterway is therefore necessary for the fishing and also its driving force is put to good use such as the turning of the millstone that mills the grain farmed by the monks into flour, the principal ingredient of their main staple: bread.

But what did this mill look like and where was it situated? There is no certitude about these questions. The size of the mill surely depended on the needs of the founding monks and would probably only have had a small wheel and a couple of millstones.

Over the centuries and even despite some problems, the Abbey prospered and acquired a number of farms, more land and 3 mills one of which is the Val-Dieu Mill which gains in importance and size over the years, but is still only driven by the one little river “Bel”.

In the middle of the 17th century, the mill sees an upturn in its fortunes as in 1678 it was decided to place a second wheel and to deviate the river “Berwinne” in order to increase the mill’s capacity. A dam was built at 600 metres and a deviation to the mill was built, half as a stone underground tunnel .

The building itself also saw some major changes. The last modification dates back to 1731. It was Prior Dubois who oversees the works. He places a stone on the major façade with his coat of arms and his motto: “recte et fortiter” (loyally & courageously).

In 1789, a farm is added to the north-west side of the mill. The farm was constructed by Prior Delcour who also places his coat of arms and motto on the façade: “virtute & labore” (by courage and work)

The Mill stays the property of the Abbey until 1789, a few years later as a result of the French Revolution the properties of the clergy are taken away and the Mill becomes a private property.

In the middle of the 19th century, during the industrial revolution, the wheels and wooden mechanisms are replaced by a metallic wheel and the mechanism is created in iron. This whole mechanism is still intact and remains in working state until today.

Since their creation until the early 20th century the mills provided for humans and cattle. The different grains flour where either for the making of bread or for cattle feed.

After WW2 cattle raising changes quickly and so also the production of the feed needed. The Mill becomes too old fashioned and limited to continue the production. In 1972 it was decided to modernise the mill and in 1973 the near total production is moved to the adjacent farm where a new plant is installed. The old construction is now referred to as the “Old Mill”. Since, the Mill does not stop progressing whilst still maintaining high quality of its products as well as the family atmosphere. Today the activities can be seen in two categories: the milk cow and high quality poultry. Two specific alimentation branches have also been added: feed for horses and feed for sheep.

In 1993 the old mill is assigned a new role: it becomes a restaurant (see further)

In 2001 following a request by Colruyt on the lookout for quality poultry, the owners of the Mill decide to start up a new company: “ Le s Elevages du Moulin du Val-Dieu” in a partnership with Upignac, a company specialised in Ducks Liver (Foie Gras) and Ardenne Volaille for the chickens.

In 2006, the installation of a hydroelectric turbine allows for the use of the water that has given its force to the Mill over the ages. And thus creating electricity needed for the modern mill.

In 2006 and 2010 the Mill management acquires some 7 acres of land adjoining the existing property. This land has a 1.3 acre lake, 5 acres of meadows and marshland and more. An agreement is signed between Natagora Pays de Herve and the Mill to manage together what has then become “The Nature Reserve of the Moulin du Val-Dieu”.

As of now the Moulin du Val –Dieu is the collective name for the different companies grouped together: